International Talk Like a Pirate Day is upon us!

Some of us pirate princesses be settin’ sail for Krispy Kreme in our rip-roarinest pirate togs for thar free doughnut.

Others be headin’ to the galley and whippin’ up rum cocktails. Or rum cakes. Or the official Princess of Pirates rum pudding.

Need help on your pirate lingo? Time Magazine has the essential tips for soundin’ like a scallywag.

My pick for most glamorous pirate girl.

And finally, over yonder, Penguin Books has a list of the top classics of pirate literature, everything from “Peter Pan” to “Treasure Island” to “Con Men and Cutpurses: Scenes from the Hogarthian Underworld.” Book to keep ye company durin’ those long, stormy nights on the sea!

That means it’s time to hopelessly date myself by mentioning that it’s also the 10th anniversary of the summer after I graduated from high school. Luckily, these are both perfect excuses (i.e. the movie and the fact that I’m old) to drink a lot of rum!

As promised, I tried out this recipe for Pirate Bread Pudding this past weekend (I could’ve waited until the 19th, but why?) I cut it in half, mostly because (gasp!) the rest of my household aren’t as rum-crazy as I am. Plus 2 cups of half-and-half is a lot if you only have one of those little half-pints lying around. I ended up doing a cup and a half of milk, and half a cup of half and half (that sentence is mind-boggling.) I used golden raisins; soaked in rum, of course, they’re delicious by themselves. 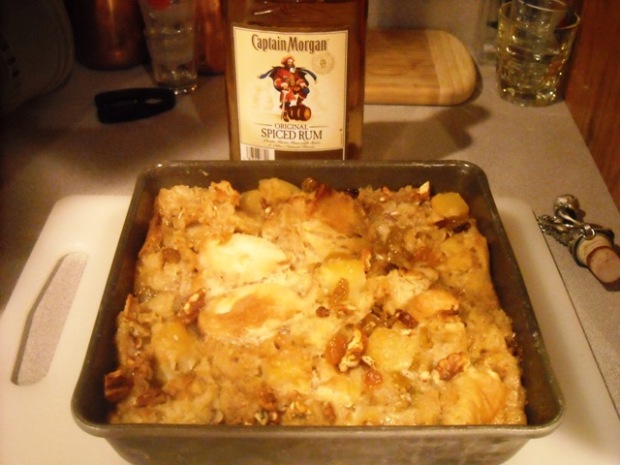 Coming out of the oven.

I also halved the sauce, which turned out super-thick and kind of grainy, even with only half a cup of butter, hmmm. All in all, whiskey plus rum plus raisins = pure pirate comfort food.

The ramekin was just for serving; I thought it looked cute.

I haven’t yet had a chance to try this recipe for Pirate Bread Pudding yet, but I will as soon as I get my hands on some pineapples, raisins, whiskey and of course, rum (whiskey and rum? It’s a pirate’s dream!)

A new excavation of a hideout in Belize–a Pirate Fortress of Solitude called the Barcadares-proves pirates lived elegantly when not plundering. Except for their rum–that they drank straight from the bottle.

Before you get all excited, to clarify, the dive team off the coast of Panama (funded by guess who), said they only thought they might have found a part of Capt. Henry Morgan’s ship, which supposedly sank in 1671 while defending Panama City against Spain while working as an English privateer.

The handsome young Welsh scion Henry Morgan, before he became the scallywag we all know and love.

They recovered a bunch of coal-encrusted boxes and chests, which probably (sigh) don’t contain treasure. Still, I think that’s worth raising a glass of rum to, don’t you?