During June and July, I finally made my first visit to the country whose strong maritime tradition resulted in my ocean voyage of last year. The first half of my post on the Netherlands can be found here.

I was astonished when I learned that this coastal village 30 km north of Amsterdam had given its name to the place that has struck fear in the hearts of generations of sailors. to the point where they get tattoos to commemorate their rounding of the cape off South America–if they survive at all.

In 1616, Willem Corneliszoon Schouten  first rounded the southernmost tip of South America. He named it Kaap Hoorn, aka Cape Horn. During the Dutch Golden Age, this was also the center of the Dutch East India company and the center of trade–basically, it was the crossroads of the world, long before other ports usurped it. This is a wooden ship lover’s paradise–you could walk around here for hours. The sheer number, and the uniqueness of the vessels on display, is just so far beyond anything you would find in the U.S. Here, a schooner incites awe wherever she goes, but this is just par for the course every day in Hoorn, where there people who actually live in schooners permanently anchored, and dinghy into work each day.

Oh Captain and I met some friendly sailors just hanging out on the quay, offering us a ride on their water taxi, which gives you a canal’s-eyes view of the Hoorn waterfront, and some champagne. Although we didn’t have time for the taxi, one of them also happened to be one of the crew members of the replica square-rigger Half Moon (Dutch: Halve Maen). This was the ship under command of Anglo-Dutch explorer Henry Hudson when he sailed into New York Harbor in 1639. It’s now on display in Hoorn as a partnership between Albany, New York’s New Netherland Museum and the Westfries Museum, and is available for public tour. Inside, it’s tricked out to look historical, with bear and beaver furs, sacks of grain, and replica cannons (but no gunpowder, which as our friend is explained, is illegal in the Netherlands, though not in the U.S.).

To get to Hoorn, there’s a bus route that runs back and forth from Amsterdam Central Station roughly every ten minutes, so it’s an easy side trip if you’re in the capital.

The view from the canal–another canal tour!

This is sort of a no-brainer, but worth it, especially if you have an engaging–and cute!–tour guide. He, of ourse, was actually the same guy who offered me champagne in the marina in Hoorn (he told me which boat he’d be on the next day, and where). It’s a hop-on, hop-off tour–pay 22 Euros for a 24-hour pass and you can get off at the Anne Frank house, wait in line for the three hours it generally takes to get through the queue, and then get on again to continue your trip. You can also get off or on at Central Station, Leidsestraat, Museum District, and City Hall. I ended up stayed on for almost three go-rounds–by the time I was finished, the guide was handing me the mic and letting me give the tour!

For me, the highlights were the view of the curch steeple where the ladies used to watch for their young men who went to sea (swoon, so romantic!) and the hundreds of canal boats that used to haul cargo on the waterways, but that have now been converted to the most popular real estate in Amsterdam.

The world championships of beach volleyball were going on while i was there.

This may not be the end of the world, but it feels like the end of the Netherlands. A former fishing village turned Belle Epoque bathing resort, it’s technically a district of The Hague. There’s also a popular piano bar on the beach there, Crazy Pianos, though unfortunately, we didn’t get there in time to see the pianist. But luckily, on a beautiful summer night in late June, you can watch beach volleyball players and surfers–yes, surfers! in Holland!–and feel like you’re somewhere very far away from home indeed.

Of course, my friend and I had to test the water, which was, of course, freezing–shattering my illusions that I had magically been transported back to the South Atlantic. But you can still enjoy a beer or five and a fresh seafood meal, and delight in the knowledge that you’re enjoying this country at its summery best.

The Hague (like every Dutch city) is delightfully compact, so it’s not hard to get to from wherever you’re staying–just walk toward the water, look for the Grand Hotel, and you’re bound to find it.

One angle of the Panorama Mesdag.

When Oh Captain first told me about this; I had no idea what I was about to see. When I arrived, the guide gave me a free audio tour and told me to hang around in the lobby long enough for the big group that just went up to see the panorma to disperse. Downstairs, the museum is a remarkable introduction to 19th-century The Hague school of painting, which was founded by Hendrik Mesdag. He specialized in moody, dark-toned scenes of rumpled fishermen and their wind-powered vessels, which had to be towed upon to the beach by horses (more of these paintings can be viewed in the Rijksmuseum (below), and reveal a bygone way of life. Sadly, none of these boats seem to exist anymore–except for the ones converted into houseboats in Amsterdam. 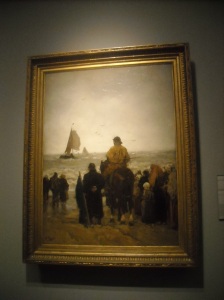 An example of a Hague School painting.

As I made my way up the rickety wooden staircase, I noticed light filtering in from the canvas, changing the view depending on what the weather is like outside. Sanding inside, turning around in this 360-degree canvas, which Mesdag completed with the help of his wife, in 1881, you genuinely feel like you’ve trudged up a sand dune and emerged in 1881. It’s like seeing all of Scheveningen laid out before you–bathing machines on one side, fishing boats on the other, evoking a bygone time.

The Prins Willem, who sailed from Middelburg to the East Indies in 1651.

After you see the Night’s Watch, the cavernous Rijksmusem holds numerous treasures for the ship geek. I was staying only a few blocks away from the Museum District with another friend (ship friends are more valuable then you could ever imagine!). I enjoyed seeing the ship’s model of the Prins Willem, and treasures from the Dutch colonial period. 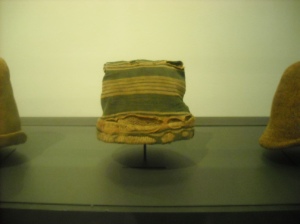 The hats of the unfortunate frozen whalers.

Most poignant was the rather grisly display of knit caps that were worn by a 17th-century whaling crew who froze to death in Spitsbergen, identified only by the patterns thereon–both in life and in death. Like the “weeping tower,” it reminds me constantly that unlike today, sailing wasn’t all fun and games. The jolly bold sailors of the past (and their women) paid a steep price for following the wind and earning their coin. But they did it anyway, and that’s why we love them.

One thought on “11 ways to experience the maritime tradition on a trip to the Netherlands, part 2”